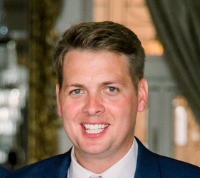 Michael Cayse pledged Beta-Nu in the fall of 2001. As a brother of Kappa Sigma, Michael stayed busy and involved with the chapter and held two different positions. He dedicated his time to be the Pledge Class President and the Rush Chairman for two years. Once he graduated in 2005, he was determined to stay connected to Beta-Nu. In order to remain close to the chapter he served as the Alumni Advisor for six years. During this time, he managed the fundraising for the new Kappa Sigma house.

At the University of Kentucky, he earned his Bachelor of Arts in Marketing. Soon after graduating, he began his career at State Farm in 2007. As a long time resident of Kentucky, he is familiar with his area and his community. His State Farm office has over 40 years of insurance experience focusing on auto, homeowners, and renter’s insurance. Throughout his time at State Farm, he was rated Top 100 New agents and participated on three company travels.

Alongside his work at State Farm, Michael is a Junior Achievement Volunteer at the Habitat for Humanity and American Cancer Society. He also spends his time at the Covington Catholic Highschool on the Scholarship committee.

Kappa Sigma means a lot to Michael. This chapter and his brothers have helped him through the toughest parts of his life. He says that Beta-Nu gave him a family after the tragic loss of his best friend and fellow Beta-Nu at the end of their Freshman year. Cayse said, “I wouldn’t be the man I am today without the lifelong brothers at Beta-Nu and I hope that the current Brothers know the opportunity they have to give back and help their fellow Brother community.” Michael’s special experience with Kappa Sigma has led to a unique bond with his fellow Kappa Sigma Brothers. He has formed lifelong friends and created a second family.