Originally published on KappaSigma.org, July 29, 2021 complete with a video presentation that is worth a visit. 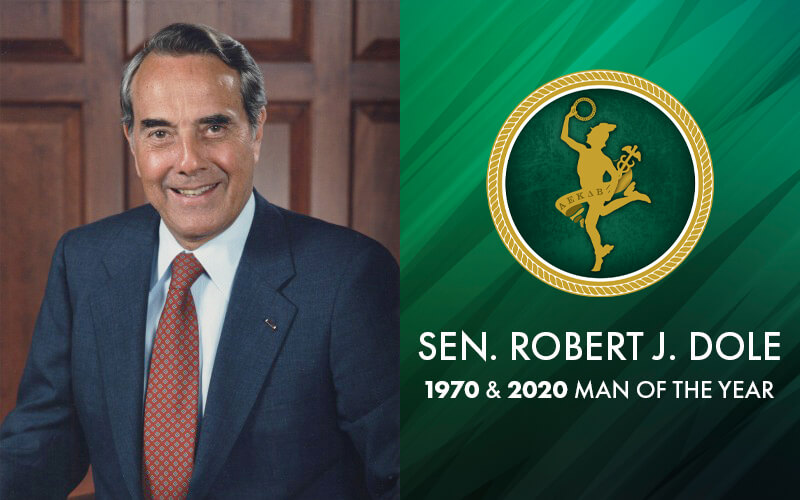 (LAWRENCE, Kan.)—The Kappa Sigma Fraternity has named United States Senator Robert J. Dole its 2020 Man of the Year, making him the first member of the Fraternity to receive the award twice. The announcement took place this past weekend as part of its 73rd Biennial Grand Conclave held in Nashville, Tenn. Brother Dole was initiated into the Gamma-Omicron Chapter of Kappa Sigma at the University of Kansas on October 4th, 1942.

The 2020 award was accepted on Brother Dole’s behalf by fellow Kappa Sigma Man of the Year Martin C. Petersen, former Executive Director of the Central Intelligence Agency and treasurer of Kappa Sigma’s International Board of Directors, who received the award in 2006. The award was also presented to Dole’s home chapter, the Gamma-Omicron Chapter at the University of Kansas.

“Kappa Sigma has always represented responsibility, kindness and service to others – qualities that have shaped my life in nearly eight decades as a Brother,” Senator Dole said in his acceptance letter. “To have been selected as the Kappa Sigma Fraternity Man of the Year on two separate occasions is a significant honor that means a great deal to me.”

“Brother Dole represents one of the greatest statesmen and public servants that the United States and the State of Kansas have ever known,” said Adam J. Merillat, president of Kappa Sigma’s international board of directors. “Brother Dole has accomplished so much since he was first awarded the Kappa Sigma Man of the Year Award in 1970. Kappa Sigma is grateful for his service and privileged to again honor Brother Dole with this award.”