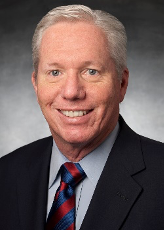 Thomas McCarty was initiated into the Beta-Nu chapter in 1968 where he became a dedicated member of the Kappa Sigma Fraternity. Throughout his time with the Beta-Nu chapter he became very involved and held three different positions. As an undergraduate, he was the Social Chairman for three years, a Rush Chairman, and a Pledge Master. After earning his Bachelor of Science in Business Administration, he graduated from the University of Kentucky in 1972. He then earned his master’s in business administration from Southern Illinois University. Tom McCarty is a significant donor to the Beta-Nu capital campaign.

By 1976, Tom started a job at Motorola. During his 28 years at Motorola, he rose to the ranks of Executive Director of Six Sigma. He led a team of Six sigma Blackbelts that provided training, coaching, and consulting to Motorola customers and suppliers in support of major Six Sigma deployments. McCarty continued his expertise on the Six Sigma methodology at Jones Lang LaSalle as the Managing Director within the Strategic Consulting group. During his 11 years at Jones Lang Lasalle, he established and led a consulting practice of applying Six Sigma to commercial real estate practices. He also led Six Sigma deployment strategies within the firm and for client engagements. Currently, Tom McCarty is the president of LS3 Consulting, and he specializes in the practical application of Lean and Six Sigma to improve business methodologies and to help clients achieve their strategic performance objectives.

As an experienced Six Sigma practitioner and deployment leader, Tom McCarty has worked with more than 50 leadership teams at various companies and government organizations. He has helped these teams develop strategic plans and deploy Lean Six Sigma business improvement campaigns. Mr. McCarty has been a featured speaker and has written many articles on Six Sigma. He also is lead author of two books, Six Sigma Black Belt Handbook and Six Sigma and Sustainability. He is also the co-author of The New Six Sigma: A Leaders Guide to Business Improvement and Sustainable Results, and Six Sigma Financial Tracking and Reporting.

Tom is married to his wife Becky, has two children, and one grandchild. In addition, Mr. McCarty is a five-year board member and a current Board President for the Crisis Center of South Suburbia, which provides extensive services for victims of domestic violence. Tom also served 10 years as a member of the board and Board President of the South Suburban United Way.

Tom McCarty has been a devoted member of the Kappa Sigma Fraternity and the Beta-Nu Chapter. His many contributions to the Beta Nu chapter, as well as his accomplishments in his professional life show his commitment to what is important in his life. Tom explains his experience and says, “When I joined Kappa Sigma Fraternity as a Freshman in 1968, I was looking for a good place to party and a place where I could get hot meals cooked for me. What I found was so much more. Now at age 69, I reflect on my life and I can honestly say that much of my personality, basic make up and lifetime success have been foundations in the brothers and experiences in the Beta-Nu Chapter of Kappa Sigma. It was here that I developed social skills and relationship building skills, often through mentorship of older brothers. I learned and developed my leadership and team building skills and the joys of community service. Those four years are at the foundation of the friendship and success in my life.” His experience at Kappa Sigma shows how it was such a valuable part of his life journey.